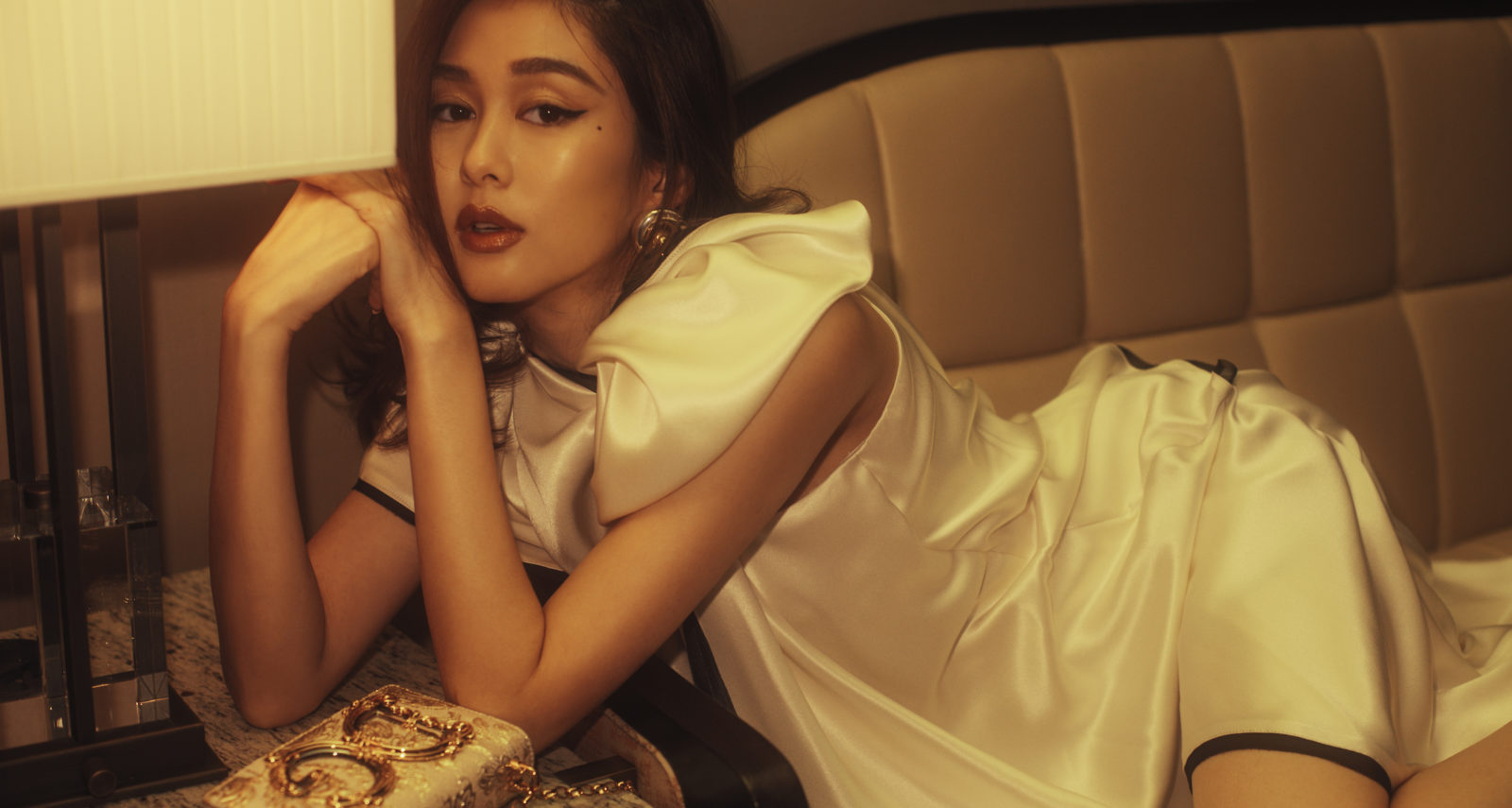 Eliza Sam, the Hong Kong actress with a million social media followers, talks to us about everything from style to stilettoes, on-screen and off.

Beauty Queen, film star, television actress, wife, mother and model – Eliza Sam is the gorgeous Canadian-born girl next door who’s been in the spotlight ever since she won the Miss Chinese Vancouver Pageant in 2009 and went on to take the crown in the 2010 Miss Chinese International Pageant.

She was shot further into the orbits of celebrity via the smash television show Divas in Distress – her popular role in the latter gave her the nickname “Princess Heung Heung”, which still follows her to this day. We snatched a few minutes from Sam’s packed schedule to chat with her.

How has your fashion journey evolved over the years?

When I was a kid, I watched my mom upcycle clothes that I’d grown out of to make outfits for my Barbie. When I was an awkward tween she let me use her sewing machine, and ever since then, I’ve been making my own clothes. I studied fashion design too. I actually wore a DIY gown to a red-carpet event – I pulled an all-nighter to make it.

What do you love wearing?

I like to mix and match classic or luxury brands with unbranded street chic. Styling is mixing something old and new, not wearing a full look.

Tell us about your accessories journey.

Growing up, I’d buy a lot of things that were trendy at the time. But nowadays I prefer to invest in classic items, ones that I’ll like and use for a long time. My motto is “quality over quantity”. Once in a while, I’ll supplement with some seasonal items, but not often. It’s less wasteful and I regret less.

That’s easy. My real love is shoes – they can make or break an outfit and I consider some to be art pieces. You can tell bits of a person’s personality by looking at their shoe collection.

Would you be influenced by a celebrity wearing a brand?

Influencers can definitely make me aware of a new bag, but I wouldn’t be influenced enough to buy it just because someone else has it. I can be inspired – if it’s styled really well I’ll think about it. There are a lot of It-bags, but I like to think about which situation of my life it fits into, whether it’s an everyday utility or a waiting-for-a-special-event kind of bag. I think a lot before I commit.

When did you make the leap from a few followers to this sudden jump to ?

I remember the day I reached 1,000 followers. I was amazed and touched that people even cared to follow me. I’m so thankful to all my followers, who encourage me to work harder and do better. It’s more than a million now and I’m genuinely amazed.

Knowing you influence young ladies who are looking at your aesthetic, are you more conscious about what you wear or post?

I’ve been aware from the beginning that, as a public figure, I inevitably have some responsibility to be a good role model. I love fashion, so I love styling and being styled in beautiful fashion. It makes me feel good. For me, fashion is an interesting thing – it can make me feel really amazing and confident, or it can make me feel self-conscious. Great fashion is really great art.

You’ve been in several television shows and films and had to wear clothes according to your character. What’s been the most memorable experience?

With shows like Emily in Paris or Sex and the City, it’s fun to look at the fashion – and there are a lot of It-items and so-called inspirational looks for that season or time frame. But I love looking at the clothing in dramas that hark back to a bygone era because we’re never going to wear such beautiful garments today.

Have you ever had the opportunity to wear such costumes?

Yes, twice, in two of my dramas. I had great costume designers and assistants who helped me wear them. You get to put on these grand robes and you really feel as if you’re in a fantasy. A lot of the historical things I wouldn’t know about, so I had implicit trust with the wardrobe department because they knew exactly what to wear according to which Chinese dynasty it was. I’ve had two parts like that, in Under the Veil and Lady Sour. Those have been my favourite costumes on-screen. I’m fully aware that, had I not been an actress, I’d never have experienced this kind of majesty in costumes. So in a way, I’m more interested in costumes than I am in contemporary fashion per se. Contemporary fashion makes me feel cool, but historical fashion offers a glimpse of fantasy.

What are the momentous outfits you’ve worn?

Two spring to mind: the gown I wore when I won my title and, of course, my wedding outfit. I have two boys now, so I guess, 30 years from now, I’ll save them for my daughters-in-law.

Rumour has it you have an epic shoe collection.

Yes, it’s true. More than 100, easily – and that’s not including what I have back in Canada. They are some shoes I have – like maybe 10 pairs – that are in mint condition. There’s a Miu Miu platform shoe with rhinestones, which is special. And heels, so many heels. Of course, I have a lot of Louboutins and I only wear them for a short period of time. When I’m home alone, I put them on, play along with some music and have my own dance party for one.

Has your fashion changed since your boys were born?

Super low-rise pants. They were so cool at the time, but I don’t think I could do it again. Ever.

Special Projects Editor
P. Ramakrishnan has been a journalist and editor in Hong Kong for the past decade. He jump-started his career writing the Society column for South China Morning Post when... Jesus was a boy. He went on to write about celebrity, lifestyle, luxury, menswear and endless spools on the juggernaut that is Bollywood. Krishnan knows far too many people in the 852 and is likely to be seen at the opening of an... envelope. He has been asked to ease up on event-hopping but then he looks at counsel like that with the disdain one reserves for those wearing a brown belt with black shoes.
events Parties celebrities Lifestyle luxury menswear The List